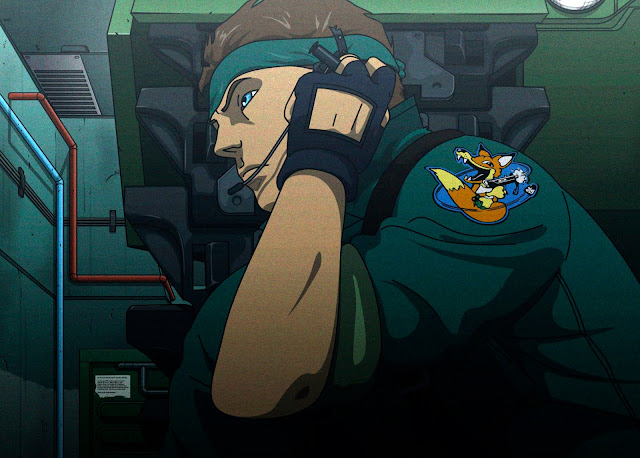 For all you Spanish speakers I recently I did an interview over at Gamuza Gaming Yakuza about my Metal Gear project, and if you're a dirty unilingual speaker like me here's a Google Translate version.
Posted by hjkhkhk at 18:42 1 comment:


I don't really use this blog anymore as it doesn't gain the traffic it used to, but figured I'd throw this up here for old time's sake.
Posted by hjkhkhk at 19:49 1 comment:

So I've caved in and started a Patreon page. I know how people feel about e-begging and what not but I thought I'd try it out, I'm not pressuring anybody into anything. You'll have access to everything for as low as a dollar.
Posted by hjkhkhk at 19:24 2 comments:

Hallway of a derelict interior, concrete pillars stand like slabs with remnants of debris at their feet. A beam of light flows past the pillars from outside, casting black shadows across the floor reaching the adjacent wall. A human silhouette stalks from pillar to pillar, among the shadows, etching toward a sprawled corpse. Hands rummage through the cauterized holes riddled through the bodies clothing. Another beam of light slowly returns. With the pillars shadows changing direction the stranger throws the corpse over shoulder and retreats out of the ruins and into the darkness. Earth is layered with ash like snow, both from the sky and the dead. Treading behemoths dwarf artifacts of the living. Three decades ago man destroyed itself and in time its last ever creation emerged. Fate's janitor, self appointed to clean up humanity's mess.

Beneath ground level, within hollowed crust, capsuled silence fills the void from what was left of running water and flying mammals. Collapsed rock fallen from its ceiling formation rests atop trampled man-made inventions, slowly reclaiming its place as a dead planet. An echo bangs from an operating bench with a lamp overhead. A soldier, dried out and mummified, lays wrapped in its battle dress garb as an elder, living man stands before it like an undertaker. Forcefully stripped and torn, the clothing is tossed to a nearby desk. Items are removed from pockets and pouches like an autopsy; a service pistol, faded photographs, two way radio and an empty lighter. Cold and lonely, with memories and a weapon for company. The same story for every carcass, desperate to find and connect with civilization. Not for the man who hauled it here, however. Seven decades young, yet tired and without purpose. Surrounded by a decayed museum of efforts and failures from a time long ago enough to forget, for now he merely exists without lonesome. The soldier's items, wrapped in the clothing it came in, is thrown to a mass pile with the rest. The lamp is switched off, and it's back to solitude.

A shrieking jolt of sound fires across the cave. He stands and turns toward the pile of which it's emanating. Hesitant, he walks toward the crackling and sizzling of a swirling frequency until what is recognized as something distant. "..vivors. There's casualties but we've made it west. Due We..." Crouched and reaching into ashen cloth, he slowly pulls the two way radio toward himself as the emitted noise burns to its end. A transmission from a far off place, crossing over into his domain. Thirty long years since a voice. Nothing is more nostalgic. Twisting the radio tuner in an attempt to discredit this moment as fantasy, to no avail he's left with uncertainty. His heart races as the radio drops to the cave floor.

A dormant emotion grows. No longer stifled by the perpetuation of survival, but to reawaken potential. To risk everything again like the glory days. However this is not his world. Moving on from here would mean never returning to his tomb of complacency. Tools and technology are virtues of his past, yet they failed him in distinguishing and preventing the outcome of this era. Reminding him to remain discouraged by guilt, that he was bested by another tool, another technology. Flesh and blood must submit to its mistake. But somewhere out there, flesh and blood has instead risen despite what it has wrought, resulting in a new investigative lead.

Staring at the wreaked engine that once howled through industrial zones and concrete undergrowth lays euthanized by the weight of rock and stone. Next to it, balancing back the subduing rubble, stands something indomitable. A riot control vehicular tank built before the nuclear war remains untouched and shelved away like the cape and cowl of a once crusader.
Posted by hjkhkhk at 01:38 2 comments:

Over the years I've had criticism from sound engineers about the quality of my original video's sound effects. Obviously, I made that project in my bedroom in my parents house without any experience, but little did I know it'd get as much notice as it did. So I've always felt a little embarrassed about my inadequacies being seen by so many people.

Now one of those inadequacies has been rectified by John Nathans, an actual audio designer. This was done of his own volition, but I thought it was so good it had to go up. I don't mind having two versions, either, kind of reminds me of how many different versions Ridley Scott has of his own films.